The use of Bukit Jalil as temporary bus terminal has been discontinued. Please read latest update below for current bus terminal location.

Yesterday, the usually congested Jalan Pudu was devoid of the usual lines of express buses normally parked by the roadside while waiting to pick up passengers from the Puduraya bus terminal.

The March 19 date for closure of Puduraya bus terminal for four months of renovation works was postponed to yesterday, April 12. Despite media reports and banners inside the terminal, many commuters were caught unawares.

North- and south-bound travellers now have to take their buses at Bukit Jalil following the four-month closure of the Puduraya bus terminal. 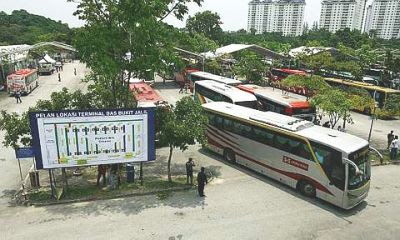 RapidKL shuttle buses are available, at a frequency of 15 minutes, to ferry passengers to and from Puduraya/Bukit Jalil. The fare is RM2.

At the Bukit Jalil terminal, there are 98 ticket counters, a waiting area with 3,000 seats and 24 food stalls capable of accommodating 600 customers at any one time.

Currently, the only entry to Puduraya terminal is via the overhead bridge.

The upgrading work at Puduraya is expected to take four months to complete.

While Bukit Jalil accommodates North and South-bound travellers, those heading to the East Coast will need to go to Hentian Putra.

Here's a map of Puduraya to help you along.

Image source: The Star
Posted by HappySurfer at 3:28 PM