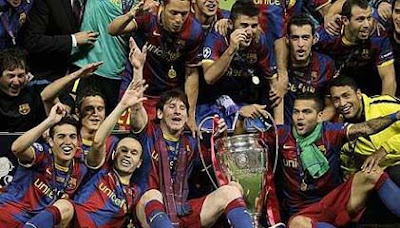 There is no doubt. Manchester United lost to a better team. Congratulations, FC Barcelona!

The Star: At Wembley Stadium, Barcelona and Lionel Messi put their places among football's all-time greats beyond all doubt Saturday as the Argentina striker scored one goal and created another in a 3-1 Champions League final win over Manchester United.

Ferguson said, "They do mesmerize you with their passing and we never really did control Messi. But many people have said that."

"In my time as manager, it's the best team I've faced," he added. A third Champions League title in six seasons and fourth overall means that only Liverpool, AC Milan and fierce rival Real Madrid have won more European Cups than Barcelona's four.

On the Man United website, Sir Alex was quoted as saying, “I think it is the best team we have ever played. They are at a tremendous peak in the cycle of their team and you get teams who elevate themselves to that status and I think Barcelona are that team.

Sir Alex feels his side also belong among the European elite after a strong run to a third final in four years.

"I think our record this season has been excellent. We have won some really important games, but tonight we were beaten by probably, in fact definitely, the best team in Europe. There is no shame in that. From time to time you do come up against a team that is better than you and tonight was that."

Nemanja Vidic of MU said, "“I think if you look at the past, we have never played against a team like we did tonight against Barcelona. We just have to give them credit. They played good football and they deserved to win.”

Commentators had said before the game that Barcelona, which had already won a third straight Spanish league title, would be ranked among football's truly great sides with victory over United.