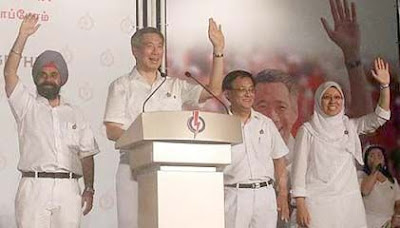 Singapore's Prime Minister Lee Hsien Loong waves to supporters after winning his constituency during a victory party.
The People's Action Party (PAP) of Singapore has been given the mandate to rule Singapore. The Workers' Party (WP) won big when it wrestled the hotly-contested Aljunied GRC from the PAP. It also retained the Hougang SMC. More news as follows..

SINGAPORE: Prime Minister Lee Hsien Loong says the voters have decided and he is "humbled" that they voted the PAP government back to power.

Speaking at a post-victory news conference after the General Election results were announced on Sunday, Mr Lee said voters had given the PAP a strong mandate but he is aware of the concerns and issues voters had put across.

"We hear all your voices," said Mr Lee.

The PAP government was returned to power with a majority of 81 seats including five uncontested seats. The strong showing is a relief for Mr Lee, who was seeking his second mandate as Prime Minister.

Although it was a sweeping win in terms of seats, the PAP's share of the popular vote slipped to 60.14 percent from 66.6 percent at the last election in 2006.

One of the most challenging contests in electoral history, the polls saw competition in 82 out of the 87 seats among seven political parties.

Sentiments were shifting towards the Workers' Party and Singapore Democratic Party (SDP) in the last few days of campaigning, with talk that PAP could lose seven or eight seats especially hotbed Aljunied GRC and Holland-Bukit Timah GRC.

But the PAP ended with 81 out of 87 Parliament seats.

He said the election had heightened political consciousness and awareness among Singaporeans.

Mr Lee, who is also the Secretary General of the People's Action Party, said the election marks a distinct shift that all Singaporeans, not just the political parties, must adjust to.

The nine days of intense campaigning focused on major issues such as the cost of living and housing and healthcare, and Singapore's political system and values.

Mr Lee noted that people aired their frustrations and grievances -- and he said that the government has heard them.

"The PAP will analyse the results of the election, learn from what has emerged from this General Election, put right what is wrong, improve what can be made better, and also improve ourselves to serve Singaporeans better," he said.

Touching on the PAP's loss to the Workers' Party in Aljunied GRC, Mr Lee said Foreign Minister George Yeo and his team accepted and respected the voters' decision.

"It will be a heavy loss to my Cabinet and my team of MPs not to have George, Lim Hwee Hua, Zainul Abidin, Cynthia Phua and Ong Ye Kung. They are five good men and women. But we too accept and respect the voters' decision and we wish the new Workers' Party MPs well in serving the Aljunied residents," said Mr Lee.

Prime Minister Lee noted that there will be 81 PAP MPs and nine opposition MPs in the next Parliament -- six elected from the Workers' Party and three Non-Constituency MPs, if the opposition parties take up these seats.

He said the government looks forward to these opposition MPs offering alternative views and helping to improve debate in a constructive manner.

Summing up, Mr Lee said it is time to heal and move forward -- not just for the parties, but for all Singaporeans.

"The political contest goes on in every country in one form or another. But in Singapore, we must make sure it's harnessed for the good to make Singapore stronger and never to divide us. We are all fellow Singaporeans, so at the end of the General Election, let us close ranks to secure our future together," said Mr Lee.

Official results from The Star: