E.coli outbreak in the cards? 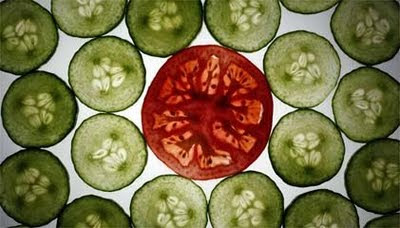 No, the above is not a kaleidoscope pattern. It's a pattern of sliced cucumber and tomato, vegetables that are causing the current E.coli outbreak in Germany. 14 people have died and more than 300 seriously ill in Germany. The outbreak has spread to other north European countries and is expected to worsen in the coming week according to medical experts.

From The Star..Germany E.coli cucumber death toll rises to 14:
The source of the virulent strain of the bacteria is unknown according to German authorities. Most of the deaths have been in northern Germany. The E. coli pathogen has been identified on cucumbers imported from Spain but it is unclear if they were contaminated there, during transport or in Germany.

There are 36 cases of suspected E. coli in Sweden, all linked to travel in northern Germany, authorities said. A small number of cases have been reported in Britain, Denmark, France and the Netherlands, all linked with travel to Germany.

The identified pathogen, hemolytic-uremic syndrome (HUS) affects the blood, kidneys and in severe cases, the nervous system and can be particularly serious for children and the elderly.

Consumers have been warned by German authorities to avoid eating cucumbers, lettuces and tomatoes and some products have been ordered to be removed from shelves.


Can we really predict the future or know what's coming? Below is a prediction (report) received last week, for the forthcoming fifth lunar month which begins on June 2. There is mention of armed conflicts and terrorist activities and natural disasters. What's new? However, I was skeptical when "DISEASES" was mentioned, but with this E.coli outbreak, can we mark it down as mere coincidence?

We will be entering into the 5th lunar month that is from the 2nd Jun – 30th Jun 2011. Many people might have experienced many changes during the past lunar month. Some were traumatized, some rejoiced, leaving some still wondering what had happened. Putting the past behind us, this 5th lunar month will be a time for new beginnings, to pioneer new ideas and developing new routines. If you want to watch your ideas grow and your dreams take shape, this will be an opportune time to act. Most of us will be able to develop our individuality and leadership qualities to the utmost. Our creativity and originality will be enhanced. We will be ambitious and possess a great deal of drive to lead. We will be able to express our ideas clearly, be persuasive and charismatic. In general, you will have great expectations for yourself. Remember that you can be a pleasant, persuasive and confident leader. However if you go overboard you will run the risk of becoming self-indulgent, opinionated, selfish and domineering. Should that happen, others might feel intimidated and will withdraw from you. In doing so, you might also attract the wrong group of people to work with or to implement your plans. This will limit the likelihood of success of your plans. Success cannot be achieved by being alone or by living in our own world. Do not be a self-indulgent and unpopular leader. You will want to be seen as a rising leader with unlimited potential. Start to put your dreams into action now!

During this 5th lunar month, there will be a great deal of social activities and enjoyment in terms of wining and dining. As everybody’s popularity starts to soar, there will be a lot of negative temptations lurking around the corner and many might be drawn towards vices. Everybody will appear to be friendly but most relationships might remain only on the surface. It will be best not to take such “friendliness” at face value. You might join in the fun but avoid being hooked on to any negative forming habits that will have detrimental effects on your creditability and relationship with your life partner etc. For those of you who have had a personal reading done with me and if it is indicated that you might meet your special person during this month, your personal reading will supersede the above.

There will also be armed conflict and terrorists activities in the Indian Sub- Continent and parts of Eastern Europe. North East Asia and the US might be plagued with natural disasters and diseases.

For those who need to cleanse their crystals or have been using their crystals actively, you might want to use the moonlight of the 17th June 2011 to do so.