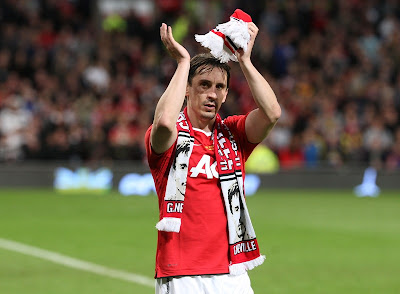 Please excuse the overkill on news about Manchester United but please bear with me while I close the loop on the previous post about testimonial match for Gary Neville who retires from competitive football and who will join the Sky Sports team now his playing days are over. Gary Neville goes down in history as a one-club player (just with Manchester United).

The star at the testimonial match against Juventus at Old Trafford is, of course, Gary Neville but it was a treat to see Beckham playing again at Old Trafford donning his number 7 shirt playing under the Manchester United banner alongside the other Class of 92 players and old teammates including Nicky Butt, Phil Neville, Ryan Giggs, Paul Scholes, and Gary Neville. There were two number 7s on the pitch, the other being Michael Owen. As if on cue, Beckham even had the chance at a free kick a la the old days bringing on knowing smiles from him and his long-time friend, Gary Neville. Some memories.. 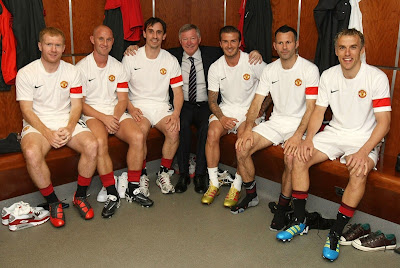 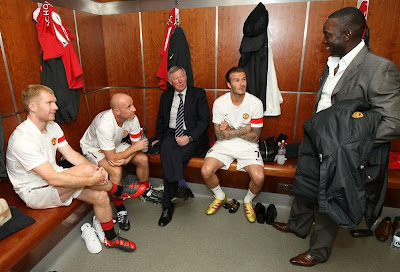 Recognise the gentleman in the suit? That's Dwight Yorke, alright. Together with Andy Cole, they made a formidable striking force back in 1999 when MU won the treble that season. Those really were the days! Dwight was one of the two commentators at the testimonial match.

A reunion on the pitch, Gary and David Beckham 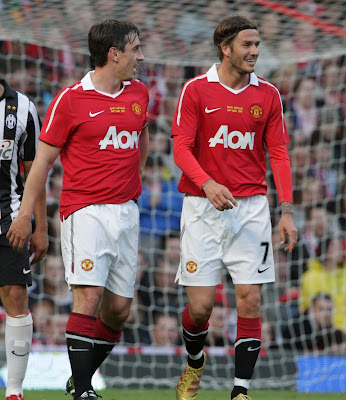 Beckham, Phil Neville (Gary's brother who plays for Everton now), and Nicky Butt (who's playing in Hong Kong currently.) Beckham is with LA Galaxy (that's Los Angeles Galaxy) but trains in one of the clubs in Europe when it's off-season in the US. Love the way he's still able to control the ball. Check out his boots. 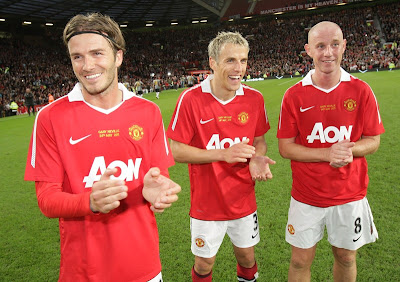 We got to see Wayne Rooney, Ryan Giggs and Paul Scholes being featured for the opening 30 minutes. No one was injured which made Gary Neville happy. It was a good game to watch though MU lost to Juventus with a scoreline of 1-2. The crowd was 42,000 strong at the stadium.

A picture of Gary Neville receiving an MU club award. 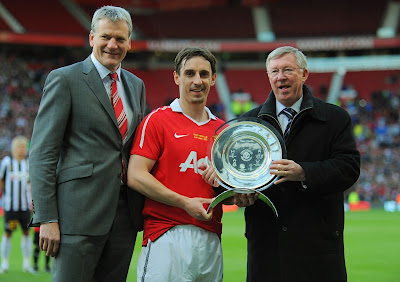 Gary Neville steps out at Old Trafford with his children for a final farewell to the United faithful. 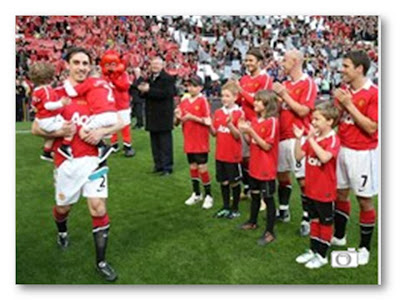 Alright, how did I know what happened? I watched it live on You Tube this morning. It was a last-minute find. Enjoyed the match but woke up this morning feeling like a zombie. LOL!

All pictures are from the ManUtd website.
Posted by HappySurfer at 11:08 AM