The Bangkok flood situation was our table-topic this morning at breakfast. I haven't paid much attention to the flood lately but looking it up again found that the situation is still a concern. Water level is still more than a meter high in the flooded areas. 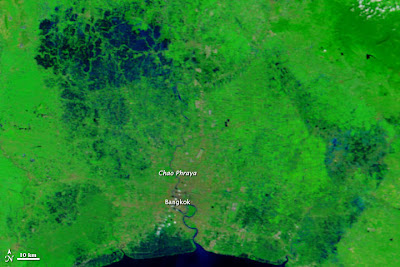 Bangkok Post reported that: City Hall has issued an evacuation order for 10 areas in Samae Dam sub-district of Bang Khun Thian district in western Bangkok's Thon Buri side as floods there have continued to rise.

The elderly, children and sick people are urged to leave immediately for designated shelters or other safe areas.

Meanwhile at Don Muang, Don Muang residents removed more of the "big bags" forming a floodwall on Vibhavadi Rangsit Road despite the prime minister's insistence that the barrier must stand.

About 40 residents helped to manually move the 2.5-tonne bags. Protest Leader, Mr Thinnakorn, insisted pulling the big bags away was to release some of the floodwater that has been trapped in more than 20 housing estates and to allow boats used by residents to get through. The removal of the bags was carried out in the presence of senior police from Don Muang police station.

On the other hand, according to Pracha Promnok, director of Flood Relief Operations Command (Froc), the barrier is helpful as it slows water flowing into Bangkok through upper districts.

At the same time, many more water pumps have been deployed to hasten drainage. Read Don Muang bags protest grows

I have got here a video that allows us to have an aerial view of the flooding in Bangkok.

And here is an image taken by the Advanced Land Imager (ALI) on NASA’s Earth Observing-1 (EO-1) satellite. Image was taken on October 29, 2011. 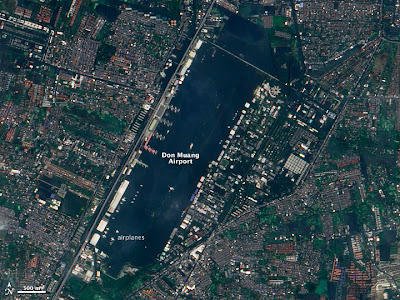 Flood waters inundate Bangkok's domestic airport at Don Muang where flooding is most obvious, but much of the area in the image is flooded. The spaces between buildings and under trees are blue. Signs of flooding are also evident throughout the large image, which includes a much wider area.

The Don Muang Airport, a domestic airport, stopped operations after the runways flooded on October 25. However, the building housed the Flood Relief Operating Center and some 4,000 flood evacuees. The evacuees were forced to leave on October 25, and the Flood Relief Operating Center moved on October 29 when the building flooded. The airplanes shown in the image were decommissioned before the flood. Bangkok’s primary airport, Suvarnabhumi, is still operating and is expected to stay dry.
(Source:earthobservatory.nasa.gov)

Some good news as well. Recovery and clean-up work have begun at four flood-hit industrial estates in Ayutthaya as water in several parts of the central province has receded. They are Rojana, Hi-Tech, Bang Pa-in and Factory Land industrial estates.

Factory Land is almost dry as 80% of the estate has been drained. Of the estate's 93 manufacturing plants, 12 have resumed full operations while clean-up work is under way at the remaining plants.
More..Recovery, clean-up starts at four Ayutthaya estates

If you are still thinking about going to Bangkok, here is more information which may be of interest:

According to The Examiner:
Travelers from the US to Bangkok beware! The ongoing flood waters have nowhere to go in Bangkok, where over 5 feet of rain fell since March. Pacific coast travelers need to know that subways, garbage and travel are seriously affected including the Grand Palace and Safari World. Normally, only 40 inches of rain fall in Bangkok. Even worse, this water is trapped with no end in sight. California residents and travelers with travel vacation plans to Asia will want to skip Bangkok for the near future.
More..Bangkok flood spreads to subways, garbage piles up under 5 feet of rain

Mixed messages from Thai government and Bangkok officials continue to leave locals uncertain about when the city's flood situation will be resolved, as waters continue to sweep through parts of the city.

As of Monday most major tourist areas in central Bangkok, such as Sukhumvit Road, Siam and Silom, are still dry. Shopping malls, bars and restaurants in those areas are open, while most major hotels are operating as usual, including those on the Chao Phraya River.
More..Thai flood crisis: Updated info for tourists

And finally, a future concern? Will Thailand flooding be a major obstacle to contend with in the years to come?
The Thai capital, built on swampland, is slowly sinking and the floods currently besieging Bangkok could be merely a foretaste of a grim future as climate change makes its impact felt, experts say. - Floods Show What Lies Ahead for Sinking Bangkok