Looks like the flood situation in Bangkok is still a concern, probably an understatement here. We have to be in the midst of it all to experience the hardship and frustration. I am not familiar with the road nor area names but to those who are, below would be more meaningful to you.

It is still heart-rending to see pictures of the floods, especially of the animals who are equally if not more stressed out - which reminds me, the pictures as mentioned earlier are coming up next. In the meantime, here is today's update on the flood situation..

The government's attempts to safeguard Lat Krabang and Bangchan industrial estates from the northern runoff were frustrated yesterday when more than 300 residents protested against the closure of Khlong 9 water gate in Pathum Thani's Lam Luk Ka district. 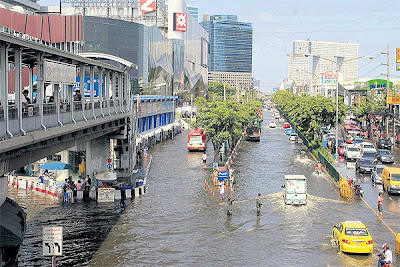 Some updates:
- The northern runoff has reached Lat Phrao intersection in Chatuchak district, disrupting businesses, residents and the Flood Relief Operation Command (Froc) headquarters nearby. Water level was measured at 60cm at midday yesterday and appeared to be rising. Residents and employees had to wade through knee-high water to flee flooded homes and workplaces.

- Part of Lat Phrao Road from Soi Lat Phrao-Wang Hin 87 to Lat Pla Khao Road was covered with about 30cm of floodwater.

- Floodwater levels in Senaniwes 1 and Senaniwes 2 housing estates and Wat Lat Pla Khao were measured at between 80cm to 1m. Evacuation order yesterday has been issued for these areas by Bangkok governor, Sukhumbhand Paribatra.

- After Lat Phrao, floodwater was expected to flow to Ratchadapisek Road and the wider Chatuchak area as the topography map shows that the two areas sit on low-lying zones, said Seri Supparathit, a Rangsit University expert on natural disasters.

Elsewhere in Bangkok, the deluge has expanded to larger areas in many districts. More..Protesters block sluice gate closure

With the floodwater raging south trying to reach the gulf, Rama II Road looks to be flooded.

A source at the Flood Relief Operations Command said officials had decided not to build barriers to stop water moving towards the road and will let it flow over it and continue to the Gulf of Thailand.

Rama II is the only lifeline available for motorists wanting to travel to the South or resort areas in the lower central provinces. 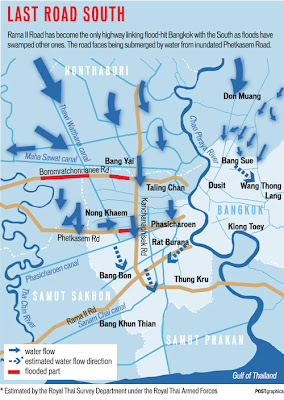