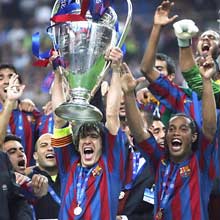 The UEFA Champions League final between FC Barcelona and
Arsenal FC promised to be an entertaining epic, but instead
Paris witnessed a masterclass of a different kind.

Ten-man Arsenal took a first-half lead against the odds and
their fabled defence protected it for almost 40 minutes, only
for Barça to get their reward for a patient display with two
goals in the last 15 minutes, from Samuel Eto'o and Juliano
Belletti, to give the Spanish side the trophy for the second time.