Sunset over Europe and Africa

It's only about 5:00pm but is fast getting dark and in part
due to the rain. The weather has been rather predictable
this past week - bright sunshine first part of the day and
rain or thunderstorm in the late afternoon. Dreary.

I wonder how does this part of the world look like from a
satellite. However, here's how parts of Europe and Africa
look like come sunset. Awesome view! 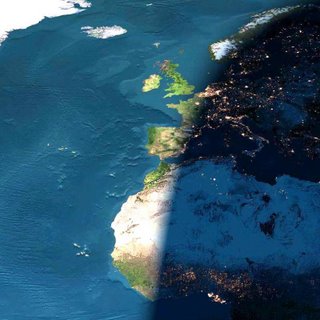 This photograph was taken via satellite, on a cloudless day.
The picture is of Europe and Africa when the sun is setting.
Half of the picture is in night.

The bright dots you see are the city lights.

The top part of Africa is the Sahara Desert. Note that the
lights are already on in Holland, Paris, and Barcelona and
that it's still daylight in London, Lisbon, and Madrid.

The sun is still shining on the Straits of Gibraltar.

The Mediterranean Sea is already in darkness.

In the middle of the Atlantic Ocean you can see the Azores Islands;
below them to the right are the Madeira Islands; a bit below are
the Canary Islands; and further south, close to the farthest
western point of Africa, are the Cape Verde Islands.

Note that the Sahara is huge and can be seen clearly both during
daytime and nighttime.

To the left, on top, is Greenland, totally frozen.

Isn't this a fantastic photograph? Unfortunately, not able to
give due credit as source is unknown.
Posted by HappySurfer at 4:54 PM