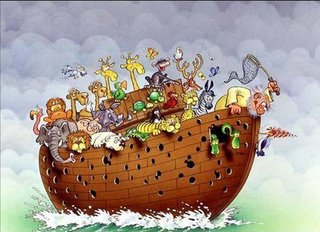 Everything I need to know about life, I learned from Noah's Ark.

One:
Don't miss the boat.

Two:
Remember that we are all in the same boat.

Three:
Plan ahead. It wasn't raining when Noah built the Ark.

Four:
Stay fit. When you're 600 years old, someone may ask you
to do something really big.

Five:
Don't listen to critics; just get on with the job that needs
to be done.

Eight:
Speed isn't always an advantage. The snails were on board
with the cheetahs.

Nine:
When you're stressed, float a while.

Ten:
Remember, the Ark was built by amateurs; the Titanic by
professionals.

Eleven:
No matter the storm, when you are with God, there's always
a rainbow waiting.

Now, wasn't that nice? Pass it along and make someone else smile too.


In case you are not familiar with Noah's Ark, the following
is from Wikipedia: 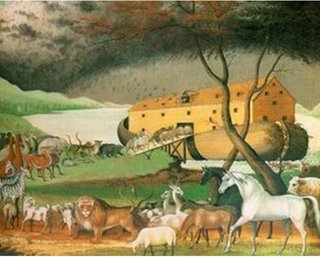 A painting by the American Edward Hicks (1780–1849), showing the animals boarding Noah's Ark two by two.


According to the Bible, Noah's Ark was a massive vessel
built at God's command to save Noah, his family, and a
core stock of the world's animals from the Great Flood.

The story of Noah's Ark, according to chapters 6 to 9
in the Book of Genesis, begins with God observing man's
evil behaviour and deciding to flood the earth and destroy
all life. However, God found one good man, Noah,
"a righteous man, blameless among the people of his time",
and decided that he would carry forth the lineage of man.

God told Noah to make an ark, and to bring with him his wife,
and his sons Shem, Ham, and Japheth, and their wives.
Additionally, he was to bring pairs of all living creatures,
male and female, and in order to provide sustenance, he was
told to bring and store food.

When Noah completed the Ark, he and his family and the animals
entered, and "the same day were all the fountains of the great
deep broken up, and the windows of heaven were opened, and the
rain was upon the earth forty days and forty nights." The flood
covered even the highest mountains to a depth of more than
twenty feet, and all creatures on Earth died; only Noah and
those with him on the Ark were left alive.

Read more in Wikipedia. There's also the story of how the
rainbow came about.
Posted by HappySurfer at 12:38 PM