Over the weekend, while some of us were out smelling flowers
or butts (oops!), or queuing up for a Blue Tooth or the government,
or even not blogging but enjoying discovering food outlets the
day before, or out sailing or having a funny heartfelt experience,
or enjoying the pleasures of the Golden Week or not blogging
but deciphering the clouds the previous weekend, or attending a
wedding , I had a different experience.

I saw a flying object.

I was admiring the clear blue sky and the clouds when I saw
an object in the sky. At first glance, I thought it was the
moon which I’ve seen many times on a clear daytime sky.

The object was as big as the moon but more oval in shape than
round. As I gazed longer at it, I noticed that it was moving
and rather fast too. I thought to myself that it couldn’t be
the moon as I’ve not seen the moon move.

It couldn’t be a plane either as it was moving too fast and
appeared more like a disc than a plane. It couldn’t be a bird
either, I thought. It was way too high up and did not look like
a bird at all. Probably a satellite? Not that I’ve seen one.

What could it be?

I later learned that a Chinese-language newspaper carried an
article of an Australian tourist capturing a picture of a
flying object while visiting Penang a day or two earlier.

Coincidence? Could that really be a UFO?

What I saw looked something like the illustration below.
This is a Powerpoint work so it's not that exact but something
along the lines of disc-like, white in the center (circular)
and sides, and moved fast. (Probably a hand-drawn water-colour
illustration or one done with colour pencils would do it more
justice.)

The whole experience lasted no more than 10 to 15 seconds
before I lost sight of it as it went behind the mass of clouds.
This is indeed exhilarating for me. I saw a Flying Object. 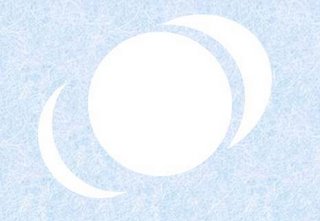 Posted by HappySurfer at 2:33 PM

Email ThisBlogThis!Share to TwitterShare to FacebookShare to Pinterest
Labels: UFO