According to The Star today, the electricity tariff in the
peninsula will rise by an average of 12% from June 1.
However, the increase will not affect about 60% of households,
those whose monthly electricity bill, is below RM43.60. 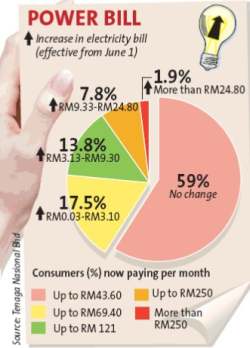 However, the report indicated that the increase will not affect the low to medium income group which uses less than 200kWh of electricity per month as the existing rate of 21.8 sen per kWh remains unchanged.

Almost one million households which used up to 300kWh of electricity per month and pay between RM44 and RM70 would experience a minimal monthly increase of between 3 sen and RM3.10.

Even with the 12% tariff increase, Malaysia still has the cheapest electricity in the region with the exception of Indonesia.

Lower rates during off-peak hours between 10pm and 8am for both domestic and commercial sectors remained unchanged.

Also retained is the 10% discount in electricity tariff for government schools and institutions of higher learning, welfare homes, and places of worship.

Read article here...
Posted by HappySurfer at 10:38 AM