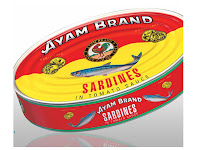 Like everything else, the Internet is also like a double-edged sword. It can be used for good, it can also be used for bad.

Lately, there has been an email circulating that our local Ayam Brand of sardines/mackerel contain non-halal ingredients thus making it unsuitable for consumption by Muslims, which the company has denied and with good reason too. To quote The Star:

Ayam Brand has denied allegations circulating on the Internet that its sardines contained non-halal ingredients.

In a statement yesterday, the company said its sardines and mackerel products, and factory in Taiping were certified halal by the Malaysian Islamic Development Department’s (Jakim).

“Muslims and non-Muslims can consume Ayam Brand sardines and mackerel with peace of mind,” it said.

The company added that it was contemplating action against those who were behind such false statements.

Incidentally, this is the only brand of sardines that I buy. Other brands just don't match up. By the way, I read that If you have arthritis, do eat four to six fish meals a week, especially salmon, sardines, mackerel, albacore tuna and herring. Also, eat lots of vegetables and spices such as ginger. Celery seed eases gout, a form of arthritis, according to one expert. There you have it, one of several arthritis treatments the natural way.
Posted by HappySurfer at 2:01 PM