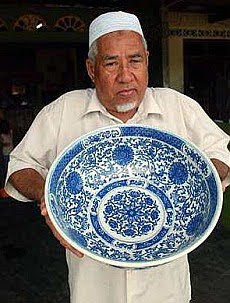 Here is an interesting story that The Star reported today. This ancient Chinese bowl which a man in Besut (Kelantan, I think) inherited has magical powers and can even cure erectile dysfunction. Mind you, not something as simple as an allergy relief, but erectile dysfunction.

The bowl, believed to date back to the 16th century, was given to Mohd Nor Daud, 70, by his ancestors probably by traders from China.

He claimed that even seawater could turn into freshwater that was safe for consumption if stored in the bowl for eight hours. Cooked food such as chicken curry could be kept in the bowl for days without refrigeration — and the food would not go bad.

the bowl, measuring 132cm and 16cm, would also produce a violin-like melody when it was slowly tilted to its side.

He also said those who intend to hold the bowl must clean their hands thoroughly or they would not even be able to lift it.

Mohd Nor also claimed that an old man appeared in his dream once, revealing to him how to use the bowl to cure illnesses. However, he said he was unable to comprehend the message in the dream.

He had been offered RM5,000 for the bowl but he turned it down. He said he would hand it over to his children when the time is right.
Posted by HappySurfer at 10:32 AM