Egypt is a popular tourist destination... but not now... 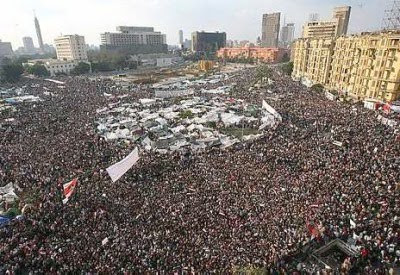 This image is on the frontpage of The Star today. At first glance, I thought the big patch of brown was a swarm of bees. They are actually Egyptian anti-government protesters gathering in Cairo’s Tahrir Square yesterday as they mark the 16th day of protests against the 30-year-old regi me of President Hosni Mubarak.

Egypt with her rich history and interesting attractions is a popular holiday destination but sadly tourists were seen leaving the country when the protest started. I read that close to a million tourists have left the country. There goes the tourist dollar, and lots of it too.

What do we normally associate Egypt with? The pyramids come to mind, don't they? The pyramids even made it into the Transformers movie, Revenge of the Fallen, which incidentally, is being shown on HBO this month. The Nile River cruise, according to my friends who have taken the cruise, is a must-do when visiting Egypt. Let's hope all this will come to an end soon and life can pick up where it stopped for their citizens.