Aftermath of the flood in Johore 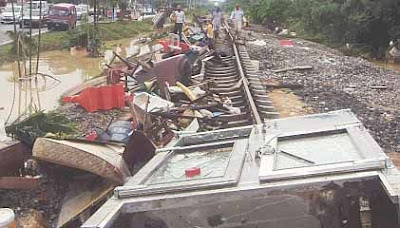 That's a mattress alright amidst the debris left behind by the flood. Household items like mattresses, sofa and even refrigerator lying washed up on the railway track in Segamat after the floods had receded.

After days of incessant rain and floods, the situation is improving and the number of evacuees are returning to their home and some to catch up with preparations for the Chinese New Year.

The sun is shining again and the worst appears to be over.

Prime Minister Datuk Seri Najib Tun Razak, who visited the site, said flood victims could expect aid from the Government to rebuild their lives, adding that the authorities would assess the damage.
Posted by HappySurfer at 9:36 AM