Dogs, even tigers can be trained to perform tricks but can fish do tricks? In a magic show performed by Chinese magician, Fu Yandong, fishes were able to swim in unison.

However, animal activists in China say the now-famous magic trick that showed goldfish swimming in sync for the Lunar New Year is abusive and are asking the state broadcaster not to show it again. The worry is that magnets were implanted in the fish or that they were controlled by electric current. 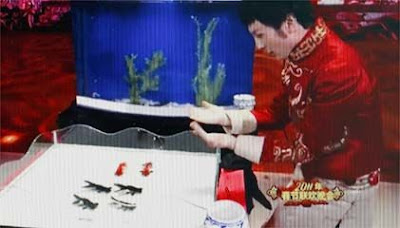 Fu is scheduled to perform the act again during Thursday's China Central Television (CCTV) broadcast of the Lantern Festival, which ends the Lunar New Year events.

Wondering what the fuss is all about? Here's the video.


Source:
Chinese worry New Year magic act is cruel to fish
Posted by HappySurfer at 9:23 AM