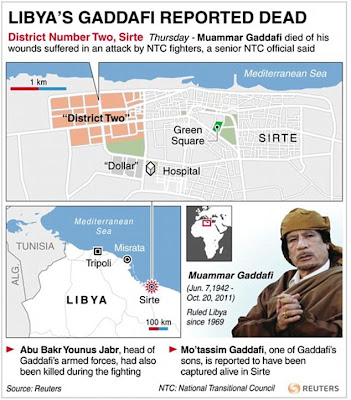 'What did I ever do to you?': What Gaddafi said as he begged for his life

- Libyan prime minister confirms that former dictator is dead
- Gaddafi tried to flee in a convoy hit by American drone
- Vehicles were also shelled by Nato fighter jets...
... before being driven back to his compound in Sirte
- Gaddafi in final attempt to flee before final push by rebels
- 'Found in a hole' wearing military-style clothing, shouting 'Don't shoot'
- Rebel forces executed him in front of a baying mob
- His body was paraded through the streets of the city
More details and pictures on Dailymail.co.uk