From talking about the Boston Marathon and China Silk Road, let us get back to Malaysia. Chicken is a popular food here in Malaysia as it transcends race and religion. If fried chicken forms a good part of your meals, particularly KFC fried chicken, here is a deal not to be missed. 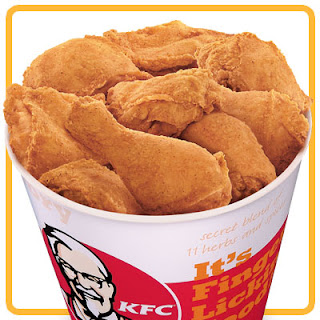 KFC is offering a 20% discount on their bucket and barrel meals.

The offer, which started from April 9 is scheduled to end on April 30 or extended up to Polling Day if the latter goes beyond April which we now know is on May 5.

The 20% discount only applies from 9.30pm till the stores close for the day. Sigh..

For the 24-hour outlets, the offer is valid up to 2am daily. (KFC has about 560 KFC outlets nationwide.)

“The promotion is to cater to the people's needs, particularly those who will be working around the clock during the campaign and election period,” he said.


Several years ago, there was some serious concern about KFC chicken and if you are still wondering as to whether KFC serves real chicken, find out the truth from Kentucky Fried Chicken - The Truth