Anyone visiting Malaysia right now would know that we are heating up for the next general election, the much-awaited GE13.

The question is WHEN. Political party flags, banners and buntings are all flying purposefully in the wind. All of a sudden even tall trees have sprouted flags.

Yes, election fever is everywhere. Parliament was dissolved last Wednesday which gives a 60-day period for elections to be held.

Most, if not all, of us would already by now have decided on who we will be voting for. Whichever party you are giving your vote to, do it with your eyes wide open and know what you will be getting yourself into should your party win. A party's manifesto provides some clues as to what to expect.

I have here the manifestos of both the opposition party, PR, and the ruling party, BN, for your information/comparison. 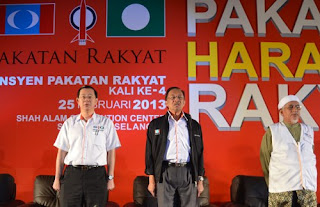 Pakatan Rakyat (PR) or the People's Alliance is the opposition to the ruling Barisan Nasional (or National Front) at the federal level.  PR currently controls four state governments.

Presenting the manifesto in February were PKR strategy director Rafizi Ramli, PAS research head Dzulkefly Ahmad and DAP's M Kulasegaran. The People's Hope consists of 4 thrusts: The People's Well-being; The Fraternity of the People; The People's Economy; and The People's Government.  The PR manifesto is as follows:

National Housing Corp: Investing RM5bil in the 1st year and RM2bil a year after to build affordable and comfortable housing

Free education for all, abolishing PTPTN

Elevate culture as a positive foundation of community

Malaysian Women's Contribution Fund: contribution of RM50 per month for wives who qualify, and husbands will be obliged to provide towards a contribution fund proportionate to their income (between RM10 to RM100) per month

Uphold the national language, ensure the rights of mother-tongue languages, and improve the command of English

Respect the position of Sabah and Sarawak in the Federation - federal co-operation, fair representation, citizenship, recognition of customary Land Rights, competence and capability of Sabah and Sarawak, justice in the oil issue and unified development

Immediate programmes for Sabah and Sarawak - eliminate cabotage system, create investment incentives to create jobs, oil companies owned by the governments of Sabah and Sarawak, highway across Sabah and sarawak, halt the construction of dams that destroy the environment and displace locals

5 technical universities and 25 new vocational schools to be built

Education reform to drive the economy

Tax adjustment to promote equity - income band will be broadened so that the 26% tax rate will be payable for taxable income exceeding RM400,000 as compared to 250,000 at present

Defend military veterans' economy and welfare - RM500 million for military Veterans Small Entrepreneur Fund, increase government contribution to the Armed Forces Board (AFFB) from 15% to 20% (managed separately from pension funds), Soldiers' Dividend will remunerate non-pensionable veterans to the amount of RM2,000 per year

R&D investments to reach 5% of GDP

RM2 billion to double the number of buses and bus routes, initiate steps towards building in the first inter-city high speed rail system in Southeast Asia

Media freedom and restore trust in the media practitioners

Abolish legislation that is "anti-rakyat" 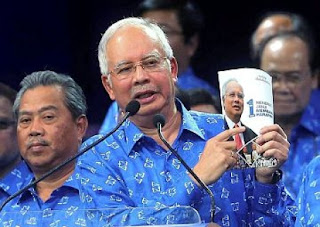 The ruling Barisan Nasional (BN) manifesto would be launched by Prime Minister and BN chairman Datuk Seri Najib Razak tonight at the Putra Stadium in Bukit Jalil. Highlights to include:

For details of the BN manifesto, visit Barisan National Manifesto.


Meanwhile, News.Yahoo! reported yesterday that Pakatan Rakyat (PR) leaders accused Barisan Nasional (BN) of copying from their election manifesto that was launched more than a month ago, and added that the ruling pact’s promises of more cash handouts would not fix flaws in the country’s system.

Posted by HappySurfer at 5:52 PM