Would you let your child have a tattoo?

Here in Malaysia some twenty years ago, tattoos are not common, in fact rare, and certainly not on a woman. Tattoos were associated with triads in the eyes of the Chinese community. But these days, you see tattoos everywhere. Men have them, women have them too. Teens, not yet, I think.

What would you do should your teen ask for a tattoo? Would you allow it? If you are not keen on it for your teen, here's a cue from US President, Barack Obama. 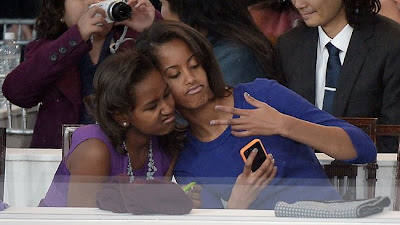 US President Barack Obama has a strategy to discourage his daughters from rebelling, perhaps by getting a tattoo himself.

Mr Obama says he and his wife, Michelle, have told 14-year-old Malia and 11-year-old Sasha that if they ever decide to get a tattoo then "mommy and me'' will get the same tattoo in the same place on their bodies and show it off on YouTube as a "family tattoo.''

Mr Obama commented in an interview taped last week and broadcast yesterday on the US Today show.

Posted by HappySurfer at 9:28 AM