What started out as a celebration at the Boston Marathon turned into a bloody scene of destruction as two simultaneous explosions ripped through the crowd at the finish line killing two people and injuring dozens on a day when tens of thousands of people pack the streets to watch the world famous race. Among the two killed is an 8-year-old boy. 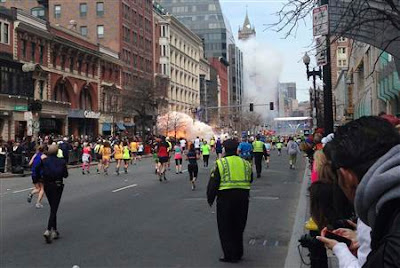 
It was also Patriot's Day, commemorating the opening battle of the Revolutionary War. The Boston Marathon has been held on Patriot's Day, the third Monday of April, since 1897. The event, which starts in Hopkinton, Massachusetts and ends in Boston's Copley Square, attracts an estimated half-million spectators and some 20,000 participants every year. 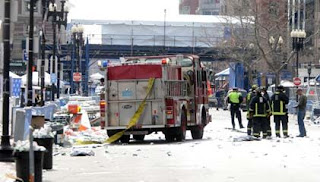 
Related articles:
CNN..Boy, 8, one of two killed in bombings at Boston Marathon; scores wounded
Hospitals reported at least 134 people being treated, at least 17 of them in critical condition and 25 in serious condition. At least eight of the patients are children.

At least 10 people injured had limbs amputated, according to a terrorism expert briefed on the investigation.

Doctors are "pulling ball-bearings out of people in the emergency room," the expert said, suggesting the bombs were designed to propel shrapnel. 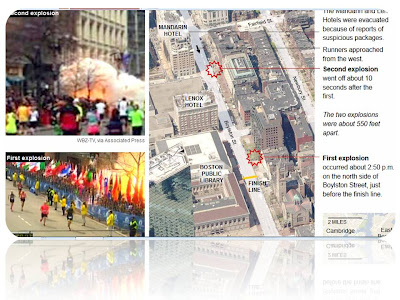 Posted by HappySurfer at 8:48 AM