Boy, was I glad to be home early yesterday. From indoors, I could see the tree branches swaying back and forth from the beating of the storm. Lightning strikes in quick succession and the wind howling outside had me being thankful that I was not on the road caught in that awful weather nor having to contend with the traffic snarl.

This shows Jalan Ampang inundated though I can't quite tell the exact location. My guess is it is at the end of Jalan Ampang near Chinatown as you can see the pre-war rows of shops in the centre and right. Anyone? 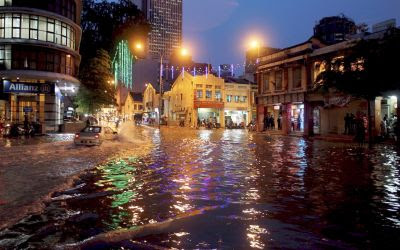 This one is along Jalan Tun Razak, the road that has a few prominent buildings including the National Heart Institute, the National Library and the National Cultural Centre/National Theatre.

The red-and-blue vehicle upfront is one among the many different coloured-taxis we have here. Malaysian taxis come in a variety of colours including red-and-blue, like the one in the picture, lime green, blue, yellow, red-and-white, orange and a few others. 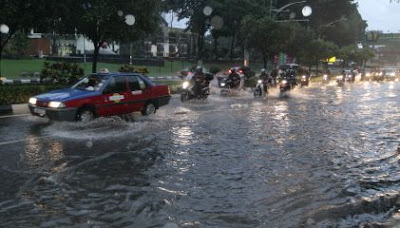 All this weather havoc happened from 5:30pm onwards as people were getting ready to finish work to head on home. Were you caught in all this?

Today is set for yet another overcast day just as what the Malaysian Met Department's seven-day forecast predicted: rain is expected again today.

No matter, have a wonderful day ahead, rain or shine! Psst.. just be wise enough to have a brolly (umbrella) with you. It pays to be prepared, remember?