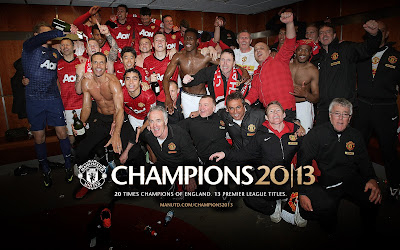 Source: Manutd.com
Two more matches to go before we come to the end of yet another great English football season especially for fans of Manchester United the latter who are the Champions this season. Yes, Manchester United are the Champions for 2012/2013 season. This is their 20th Premier League title. Check out photos of the trophy-presentation and celebration at Old Trafford..

(Incidentally, Wigan beat Manchester City last night at the FA Cup finals. This means MU will be playing Wigan at next year's Community Shield game at the start of the new season.)

Manchester United will be receiving the Barclay's Premier League trophy after the (last home) game tonight with Swansea at Old Trafford.  The game starts at 11pm Malaysia time.  Mamak stalls and pubs tonight (Bangsar area comes to mind) will be packed with patrons filling tables anxiously waiting for the jubilant trophy-lifting moment, a significant event in any club's history. In Malaysia, watching an English Premier League game is ingrained into the Malaysian culture. 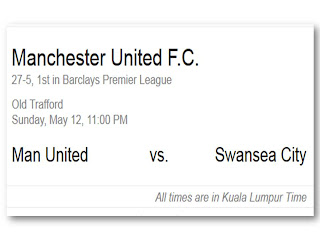 MU will play the last game of the season next week on May 19 against West Brom. Tonight's game will be the last for Sir Alex as manager of the club.

Sir Alex retires from Manchester United after almost 27 years with the club since he joined on Nov 6, 1986.   He will remain at MU as director and club ambassador.

As one who has been instrumental in the club's success, Sir Alex's announcement of his leaving some two weeks ago had an impact on MU's stock price. The club’s share price fell as much as 3.5 percent in early trading in New York within hours of the statement from Britain though it recovered some and was down 1.44 percent in afternoon trading.

Ferguson has seldom missed a day on the training field, much less a night in the competitive arena, whereas a coach his teams accumulated 49 trophies — including 13 seasons as England’s champion but only two, in 1999 and 2008, as the Champions League winner.

Ferguson’s reign makes him the most successful manager and coach — rolled into one — that the sport has ever seen. It is difficult to think of any comparable tenure in sports, politics or business during his time at United. (NY Times)

Who will succeed Sir Alex?  There were a number of club managers who were being speculated to succeed Sir Alex. NY Times' list includes Real Madrid's Jose Mourinho, David Moyes of Everton, Ole Gunnar Solskjaer formerly of MU, Pep Guardiola, Jürgen Klopp of Borussia Dortmund and a few other honourable mentions. If you had put your money on David Moyes, you would have won as David Moyes, 50, a fellow Scot, has been named to replace Sir Alex. He takes over in July.

Ferguson, knighted in the British custom for outstanding service to his ‘'industry, faces surgery when this season is done. He will undergo hip surgery in August.

We Are The Champions!