A little about a Malay wedding

In the office, we can easily xerox this and xerox that. Funny, how a company name evolved into a verb, an action we perform almost instinctively whenever we need a copy made. Strangely, we even use the term on a non-Xerox duplicating machine! 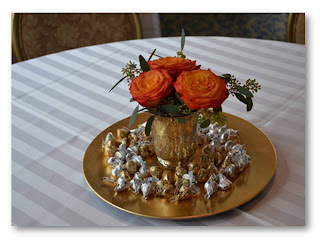 Great inventions like the Xerox machine has added convenience to our life. I was at a Malay wedding the other day and was admiring the general setup. Blue was the theme colour including the bride and the groom's attire. So much care and effort was put in from the wedding dais to the wedding favours down to the table setting - a pretty basket of flowers at each table, beautiful table cloth including table skirt held up neatly by velcro. Yes, velcro is one of life's modern conveniences. Did you know that it was invented in 1948?

But I digressed.  Back to the wedding.. the catered food was delicious. Nowadays, having catered food is the norm at Malay weddings which leaves valuable time for the family to look into other aspects of the preparation.  Not only was the food catered, the whole ensemble of the wedding set up had been outsourced to a wedding planner.  Times have changed.

For wedding favours, we came away with a traditional hard-boiled egg in a pretty wire-basket of blue and gold. These two weeks being school-holidays, we may be seeing more weddings in the offing.

Email ThisBlogThis!Share to TwitterShare to FacebookShare to Pinterest
Labels: weddings