Today, The Star reported that

A recently passed Bill will see all 71 assemblymen and state Cabinet members in Sarawak enjoying a 300% increment in their monthly remuneration.

This means that under the new Members of the Administration and Members of Dewan Undangan Negeri (Remuneration, Pensions and Gratuities) Bill 2013, the Chief Minister will earn a whopping RM39,000 a month from the current RM13,000.

Would this be the start of a salary hike for leaders of the other states? In a separate article, The Star reported that

Elected Members of Parliament can earn up to RM10,000 in monthly perks and allowances.

It said MPs are also paid an allowance of RM200 per day when they attend meetings in Parliament and RM150 when they attend any meeting, briefing, seminar or event organised by ministries or government agencies at the federal or state level that they are officially invited to.

Besides that, MPs can also claim, while on official duty, food allowances (plus 25% for tips) and funds for hotel room and laundry charges, parking and toll fees, and money for them to buy warm clothing and ceremonial attire.

Other perks MPs enjoy are free medical treatment for themselves, their spouse and children below 21 at government hospitals and clinics, computer, car and housing loans, free firearm and motor vehicle licences, as well as pension and gratuity for their services under certain terms and conditions.

The Star also did a comparison of salaries between our government leaders and their counterparts across the Causeway in Singapore: 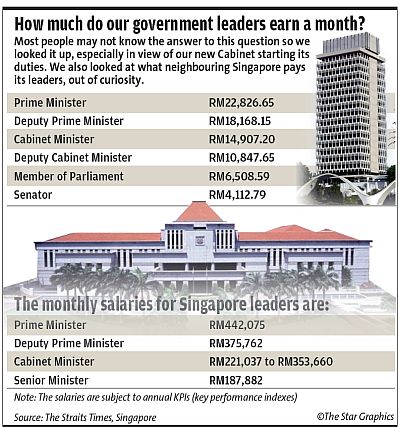 Posted by HappySurfer at 6:15 PM

Email ThisBlogThis!Share to TwitterShare to FacebookShare to Pinterest
Labels: Sarawak