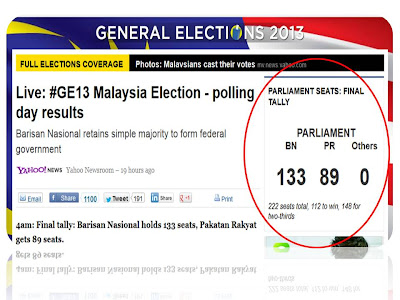 This means that the National Front (the Barisan nasional coalition) extends its rule of the country which they have been doing the past 56 years!

The Opposition is not taking the results lying down as they have cited fraud (no secret actually) and the Opposition leader, Anwar Ibrahim, says the EC must explain the electoral fraud that happened during polling session.

I was seated next to a guy at the mamak stall the other day and we started talking about the forthcoming election and he said something interesting when we touched on the subject about enrolling foreigners to vote.  He said that Malaysia could be the only country in the world that is doing that.  The young (Malay) man was shaking his head.   This is just one malpractice engaged to ensure victory at the polls and at all costs.  There are more dirty tricks (read seditious activities).  I'm embarrassed to even write about them.  The end justifies the means - never more true!   Disgusting is all I can say!

The Opposition is not accepting the decision - Pakatan rejects GE13 results, cries fraud

Pakatan Rakyat should not concede defeat!

Anwar seeks ‘national consensus’ to reject BN rule. A mass gathering will be held at the Kelana Jaya Stadium at 8:30pm this Wednesday where he will address Malaysians for the first time after the polls.


This afternoon, Datuk Seri Najib Tun Razak took his oath of office as Prime Minister at the Palace.

Earlier, Najib thanked voters for their support of the coalition to continue to lead the country.

The Barisan chairman reaffirmed that all pledges in the Barisan manifesto would be fulfilled.


The Malaysian Composite Index surged to an all-time high of 1,826 points early today, while the ringgit advanced to the highest since 1997 against the US dollar.

Posted by HappySurfer at 5:40 PM