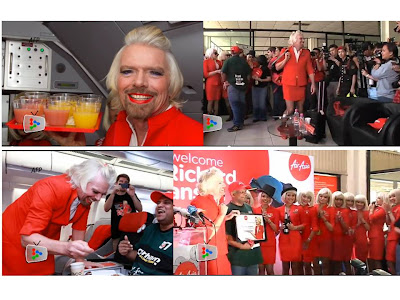 Virgin chief executive Richard Branson made his debut as a female flight attendant this weekend, donning a stewardess' uniform and serving drinks to passengers after he lost a bet with a fellow airline magnate.

The Virgin Group founder was honoring a bet made with Air Asia's CEO Tony Fernandes over whose team would win the 2010 Formula 1 Grand Prix in Abu Dhabi.

Shaving his legs for the bet but keeping his beard, Branson wore heels, false eyelashes, makeup and red lipstick while serving customers on an Air Asia flight from Perth to Kuala Lumpur.
More.. including video..Virgin's Branson Dons a Dress After Losing Bet


The interview by CNBC with Sir Richard was conducted in Singapore. Could that be the iconic rooftop Sands SkyPark infinity pool at the Marina Bay Sands hotel behind Sir Richard? 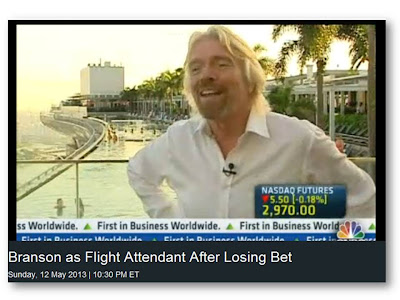