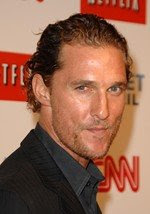 I have heard of people burying their dead cat or burying sugar under a fruit tree so that it will bear sweet fruits. This latest is a new one to me what actor, Mathew McConaughey is planning to do.

I read on MSN that Mr McConaughey plans to plant his son's placenta from the July birth in an orchard. That's what he told CNN in an interview. McConaughey says he hopes it will fertilize the land, a ritual long followed in several cultures.

"It's going to be in the orchards and it's going to bear some wonderful fruit," he says, according to an interview transcript. "When I was in Australia, they had a placenta tree that was on the river ... and all the placentas of all that tribe, all that clan, whatever aboriginal tribe that was, all the placentas went under that one tree and it was this huge behemoth of just health and strength.

"This tree was just growing taller and stronger above the rest of Mother Nature around it. It was gorgeous."

His son is named Levi Alves McConaughey, the mother being Camilla Alves.

The trend in the West these days is to name the child with both the parents' last names or surnames as we call them here. Would this ever happen in the Chinese culture? What do you think?
Posted by HappySurfer at 3:12 PM