No talk about the Beijing Olympics is complete without a mention of Michael Phelps. This American swimmer and 14-time Olympic gold medalist (the most by any Olympian), currently holds seven world records in swimming.

He holds the record for the most gold medals won at a single Olympics; a total of eight, surpassing Mark Spitz at the Munich Olympics in 1972. Overall, Phelps has won 16 Olympic medals: six gold and two bronze at Athens in 2004, and eight gold at the 2008 Summer Olympics in Beijing. That is how amazing he is.

At age 15, Phelps competed at the 2000 Summer Olympics in Sydney, becoming the youngest American male swimmer at an Olympic Games in 68 years. While he did not win a medal, he did make the finals and was fifth in the 200 m Butterfly. Five months after the Sydney Olympics, Phelps broke the world record in the 200 m butterfly to become, at 15 years and 9 months, the youngest man ever to set a swimming world record. 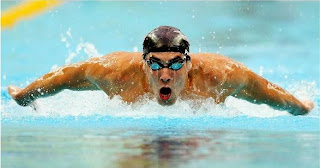 Why do you think Michael Phelps swims so well? Wikipedia notes that he has five physical attributes particularly suit Phelps to swimming:

- his long, thin torso (low drag in the water),
- arms which span 6 feet 7 inches (201 cm) (long,
- powerful, propulsive "paddles") disproportionate to his height of 6 feet 4 inches (193 cm),
- relatively short legs (lower drag, and perhaps the speed enhancement of a hydrofoil),
- coupled to size 14 feet (providing the effect of flippers) by hypermobile ankles he can extend beyond the pointe of a ballet dancer, enabling him to whip his feet (as if they were fins, for maximum thrust through [if not over] the water).

Have you ever wondered about the amount of food he eats to see him through his rigorous regimen? Phelps eats around 12,000 calories each day, or about five times more than the average adult male.

Phelps earns $5 million annually in endorsements from his sponsors, Speedo, Visa, Omega and PowerBar. For winning eight gold medals at the 2008 Beijing Olympics, he receives a $1 million bonus from swimsuit maker, Speedo.

P.S. His coach, Bob Bowman, said this of him, besides other good comments. "He's unbelievably kind-hearted", recounting Phelps' interaction with young children after practices.

For more information on Michael Phelps head on over to Wikipedia.
Posted by HappySurfer at 10:22 AM