Madrid Air Disaster and others

Good morning! What's so good about the morning, some might ask. I am in the mood this morning.... 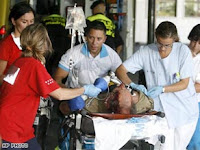 It is 10:06am right now and the heavens are crying torrents, probably for those who perished so faraway in Madrid where the count stands at 153 dead and 19 survivors, two of whom are infants. CNN reported that the severity of the injuries varies, but many of the injured have been treated for burns. The aircraft MD-82 Spanair Flight JK5022 was carrying 172 people. The flight was bound for Las Palmas in the Canary Islands, two hours away.

Tropical rain in this part of the world is not unusual but of late weather patterns have been chaotic - we get rains when we are not supposed to and the intensity or frequency is baffling. This is the seventh month of the Lunar calendar where rains fall but they are not supposed to be in torrents. It was mostly drizzles in previous times. The world weather is indeed changing. 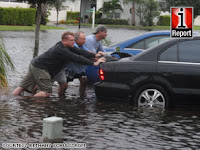 Elsewhere in Florida, Tropical storm Fay, is creating havoc causing floods and much havoc. The US National Hurricane Center said it could dump 30 inches of rain in some areas of the state.

And at the local front, at the fierce rate the rain is coming down, parts of Kuala Lumpur city might already be flooded. Perhaps a good time to put the SMART to the test afterall it is the Stormwater Management and Road Tunnel, is it not?

When it comes to flooding, some of us here do not have it good. During the rainy season, a friend of a colleague had to rush home each time her home was invaded by flood waters. She lives in the Kampong Bharu area. Yet another had to board a sampan (boat) to the main road everytime the place got flooded. That was some years back, not sure if the area is still a flood zone.

Arghhh!! There is too much bad news in the world but for Malaysians there might be a glimmer of hope? Our Prime Minister in today's papers announced that he will not be announcing the new fuel price until August 31. The new price will come into effect Sep 1. The people are hopeful of a reduced rate. What do you think?

How do you like this image? Rather cute, don't you think? Even Twitter was down this morning when I tried to log in. If you are familiar with Twitter, this is the image that shows up when it is over capacity and is down for a break. The whale needs rescuing. 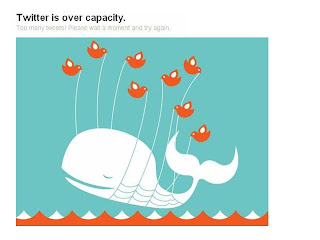 Hey! The rain has stopped or reduced drastically to a drizzle. Blue skies ahead, I hope. I read that Beijing's efforts at improving air quality are paying off. Bravo!

Before I bore you any further, let me leave you with this quote from a tweet from Little Buddha:

"Everytime you smile at someone, it is an action of love, a gift to that person, a beautiful thing." ~Mother Teresa

So, keep smiling, people! And have a happy day!
Posted by HappySurfer at 10:06 AM