Haze is in the Air

My eyes hurt when I spend too much time outdoors.

Every year around this time, Malaysia experiences air quality problem. This year is no different. For the past few days, the air has been hazy with the smell of smoke in the air. Stepping out of the office building last Thursday evening, caught me by surprise as there was a grey film all around. Trees and hills in the distance were blurred off by the smog. The smell of burning was in the air.

The Star today reported that the number of hotspots in Sumatra has jumped from 351 to 531 within 24 hours. Sumatra (Indonesia) is Malaysia's neighbour across the Straits of Malacca and the haze experienced here in the Malaysian peninsula is primarily caused by open burning from the slash-and-burn techniques adopted by farmers in Indonesia in clearing their land for replanting. This slash-and-burn technique has been extensively used for many years as the cheapest and easiest means to clear the lands for traditional agriculture.

Peat fires in Malaysia itself, caused by the dry spell experienced this time of the year, are no help either. Compounding the problem further is local farmers doing exactly what the farmers in Indonesia are doing. The Fire Department had to help put out a fire near the KL International Airport. However, authorities assured that the fire had not affected airport operations and visibility was fine, for now.

Below is a picture from The Star showing cars travelling on the Elite expressway (near the KL International Airport) which was shrouded in haze at about 6.55pm yesterday. The graph shows the number of hotspots found in Malaysia, Sumatra and Borneo. While the number of hotspots has spiked in Sumatra, Malaysia’s problem is the 40ha of burning peat farms. 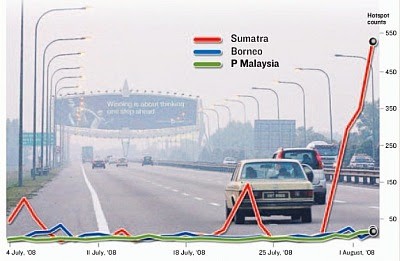 For now, Port Klang is the only area with an unhealthy API reading of 104 (a reading of 101 to 200 is considered unhealthy). Petaling Jaya and Kuala Lumpur recorded moderate readings of 57 and 61 respectively.

Going back in time, this part of the region suffered a bad case of the haze. Below is an image from Wikipedia dated October 1997. That was a truly trying time made worse by the Asian financial crisis in July 1997.

Posted by HappySurfer at 2:02 PM