Sweet! A Cinema Hall All To Yourself.. 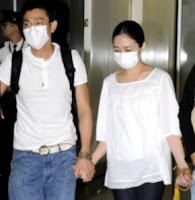 I have wondered how cinemas make money or even break even with more than half the cinema halls vacant. When I went to see Michael Jackson: This Is It the other day, there were less than 30 of us, all choosing to sit right at the back leaving three quarter of the seats in the cinema hall empty.

The other time at the Mamma Mia! movie, there were less than ten of us!! So, how do cinema houses break even let alone make money? Surprisingly, yet more and more of them are springing up all over the city.

I'm not complaining about the lack of crowd though but it sure would be a lot more fun if all those who are watching the movie with you are people you know, just like what Andy Lau and his wife had the luxury of experiencing. Read on..

CANTOPOP heavenly king Andy Lau booked a whole cinema hall to watch Michael Jackson’s This Is It with his Malaysian wife Carol Choo.

It was indeed a theatre of dreams for them as they managed to avoid being hounded by the media.

They left through the back exit after the show upon knowing there were reporters at the front entrance.

[Lau and Choo arriving at Hong Kong airport after attending the funeral of Choo's father in Malaysia in August.] Since the marriage of the couple was reported in the media in August, they have not been seen together in public.

Choo was even not seen at Lau’s 48th birthday party ion Sept 27 but his parents attended the event.

It is learnt that Lau has restricted his wife from leaving their home.

Sources said that Lau had used the “rather let you know but not see” strategy to subdue the frenzy over his marriage.

Also present were Lau’s parents, assistant and over 10 workers of his company.

The cinema management had placed a “private party” sign outside the hall.

Source: dailychilli.com
Posted by HappySurfer at 11:32 AM