Thanksgiving Day is here again. It is wonderful there is a day that is set aside for giving thanks, not that people don't on other days, of course.

Thanksgiving Day is a harvest festival celebrated primarily in Canada and the United States. Traditionally, it is a time to give thanks for the harvest and express gratitude in general. There are other cultures in the world that also set aside a day or a period for thanking the gods for a bountiful harvest. While this western Thanksgiving is perhaps religious in origin, it is now primarily identified as a secular holiday.

Today, Thanksgiving is celebrated on the second Monday of October in Canada and on the fourth Thursday of November in the United States, which is today, Nov 26. Thanksgiving dinner is held on this day, usually as a gathering of family members and friends. A Thanksgiving dinner would be something like this in the 1500s as depicted by this painting depicting the First Thanksgiving painted by Jean Leon Gerome Ferris (1863-1930), courtesy of Wikipedia. 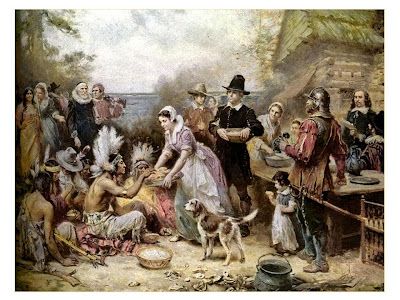 Here I'd like to take this opportunity to wish you .. 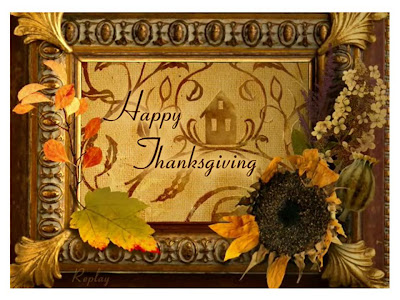 ..and All Good Things come your way.


In the US, Thanksgiving weekend is almost never complete without the shopping mad rush and bargain-hunting the following day.

Black Friday is the Friday after Thanksgiving and is observed in the United States alone. Black Friday marks the beginning of the traditional Christmas shopping season.

The term "Black Friday" originated in Philadelphia in reference to the heavy traffic on that day but more recently, merchants and the media have used it instead to refer to the beginning of the period in which retailers go from being in the red (i.e., posting a loss on the books) to being in the black (i.e., turning a profit).

Black Friday is not an official holiday, but many employees have the day off with the exceptions of those employed in retailing, health care, and banking.

Black Friday shopping is a much anticipated annual affair whereby most retailers open extremely early, as early as 5:00am or even earlier. Depending on the location, some of the larger retailers, such as Sears, Best Buy, Macy's and Walmart have been reported to open as early as midnight on the start of Black Friday in localized areas and remain open for 24 hours throughout the day until midnight the following Saturday.

This year, retailers will be extra careful and are stepping up crowd control following last year's incident at Walmart in New York in which an employee was trampled to death in the stampede.

If you are in the US, you would be spoilt for choice as to the countless Black Friday bargains available. A Top Ten guide would be helpful to zero in on the real deals and not waste time on the worst or even weird Black Friday deals. Both of these can be found on this BlackFriday2009 website.

Just in case you are planning ahead, Black Friday will fall on Nov 26 next year, but we're not going that far, are we? Or are we?!