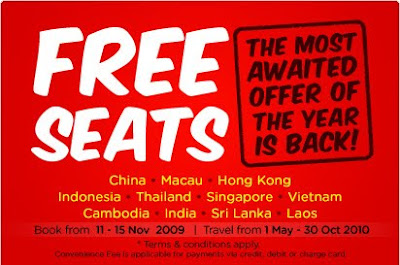 So, are you one of the thousands who managed to secure one or two or more of the 900,000 seats sold in the 48 hours of AirAsia's zero fair offer?

Some stats from The Star:

Local low-cost carrier AsiaAsia has recorded a new international sales record with 402,222 seats snapped up in 24 hours after the launch of its “one million free seats” campaign on Nov 11.

The airline said another 489,000 seats were taken up on the second day.

AirAsia’s website registered over 300 million hits in the first 11 hours of the campaign alone.


It's not too late to grab a piece of the action as the offer is still on today (Sunday).