World Cup - Into the Quarterfinals 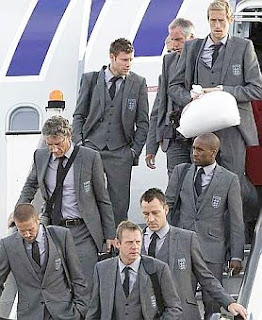 Oh dear! The team I was rooting for to win the World Cup has returned home having lost to a much stronger Germany team. The score was a humiliating 4-1. If Germany continues to play like that, they might win the World Cup. No? They've been in the finals a good 7 times and won 3 times. This time around, they've got younger and fast-running players with great skills. Of course, there's Brazil in the end but before that, they've got to battle Argentina first. I'm placing my bet on Brazil to win the World Cup. Which team are you rooting for?

I saw last night, the sad end to Japan's quest having lost on penalties to Paraguay, 5-3. That's a tragic way to lose. With that win, Paraguay advances to the last 8 stage which is the quarterfinals and they'll be playing Spain who beat Portugal 1-0 to advance.

Below is the schedule of matches for your reference courtesy of the FIFA website. Click image to enlarge. 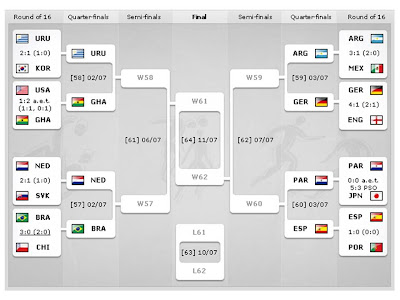 Posted by HappySurfer at 2:32 PM