First of May is Labor Day here 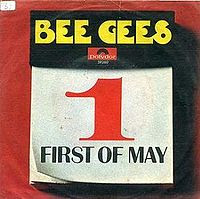 Today is Labor Day - nothing much happens around here other than a public holiday. No wait, there used to be some sort of a Government-sponsored parade or gathering in some stadium to commemorate this occasion, a tribute to Workers, you and I - but not sure if this is still practised.

I know four people whose birthday is today, so Happy Birthday, ladies. Don't think you'd see this but just know that I thought of you. *Hugs&Kisses*..

I've always thought having a birth on Labor Day is so apt. I mean, a woman literally goes through labor on that day. Labor Day. Ouch!

All the same, Happy Labor Day or Happy Workers Day, everyone. For baby-boomer music fans, May 1st often brings to mind the Bee Gees number, First of May which is a song recorded by the Bee Gees with lead vocals by Barry Gibb. First of May is a reference to the birthday of Barry's dog, Barnaby. Cool!

Bananaz has put together a sweet version of this classic song. I'm also stoked to embed some videos of this lovely First of May. 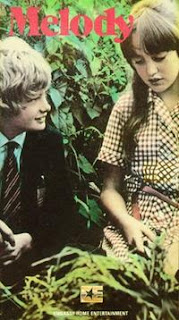 Video-watching is eye-opening because the videos show us life as it was lived in a different era. This would sound cliched but, isn't technology wonderful? The hopscotch layout in this video brings back memories when kids games were free, kids playground was a lot safer and covered more grounds, and when roads were not so congested with auto traffic and pollution. Perhaps it's our culture, we'd never go near a cemetery, let alone hang out in one. This video of the movie Melody shows the puppy lovebirds hanging out in a cemetery after school. A little trivia.. The memorable graveyard scenes of the film were shot on location at Brompton Cemetery and Nunhead Cemetery; opened in 1840 Nunhead is one of the oldest Victorian era cemeteries in London.

I picked a video with lyrics so you can sing along before you go over to Bananaz's version. LOL!

This video shows how simple and free life was, maybe still is in rural areas in the West. You could just barter a belonging for a fish in a bottle. Have you done anything like this as a child? Oh, happy days..

A little about Melody. Melody (aka S.W.A.L.K.) is a 1971 British film about puppy love. Although initially a box office disappointment in both the United States and Britain it has over the years become a cult classic. The film turned out to be an enormous hit in Japan, and in some Latin American countries such as Argentina and Chile, according to Wikipedia. I have yet to see it. Will have to seriously look out for it. In the meantime, will have to just settle for this movie trailer.

If you're one who enjoys movie soundtracks, this movie has lots of hits by the Bee Gees including In the Morning, Melody Fair, Give Your Best, and the hit single To Love Somebody, First of May, and the Crosby, Stills, Nash and Young hit, Teach Your Children.


Source: Wikipedia
Posted by HappySurfer at 11:32 AM