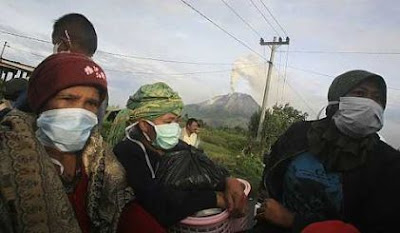 Woke up this morning expecting the sky to be overcast due to the volcanic eruption which occurred at midnight last night but it wasn't so. Earlier today, there was another eruption at 6.30 a.m., sending plumes of smoke rising from the 2,460-metre Mount Sinabung volcano after the second eruption. Inactive since 1600, the volcano had been rumbling for several days.

Indonesia is on the so-called Pacific Rim of Fire, an arc of volcanoes and geological fault lines triggering frequent earthquakes around the Pacific Basin. The eruption triggered the highest red volcano alert.

About 21,000 people had been evacuated from largely farming areas. Many fled to Medan, 50 km (30 miles), Indonesia's third-largest city, northeast of the volcano. Officials said much of the movement was unnecessary.

"People have been evacuated from areas within a six km (four-mile) radius of the volcano," vulcanologist Surono said. "Beyond six km it is safe, but there has still been a lot of panic among people here who don't understand that."

He said it was impossible to know when the eruptions would stop, but it was unlikely volcanic dust would drift to neighbouring countries.

"Here, it is three millimetres (1/8 of an inch) thick on the leaves of plants," he said.

Source: The Star..Indonesian volcano erupts again, many evacuated\
Posted by HappySurfer at 6:29 PM