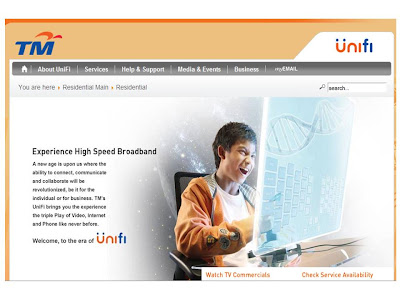 I was at the mall about a month ago and came across a new Internet service promotion. Telekom Malaysia (TM) was promoting their new high speed broadband service, UniFi. After much explanation by the sales personnel, I was convinced enough that this one would be better than Streamyx, so I signed up for it. Because it was being on promotion, there is no fee for equipment and installation. I'm now using the new service and do see the difference in the speed.

For more info, here is the UniFi website. Let me just provide the gist of it here.

The package is termed VIP -- V for Video or Internet Protocol television (HyppTV), I for High Speed Internet, and P for Phone (Voice Service). Basically, the package provides these three services.

Phonecalls are free to all TM fixed lines nationwide and flat rate of 10sen/minute applies to all mobiles and other fixed line numbers.

I signed up for the VIP5 package which more than meets my need especially the download speed of 5Mbps vs that of Streamyx's which is just 1Mbps. A download volume of 60GB is more than enough for me even if I were to download movies. I've yet to cancel the Streamyx line but will do so this weekend. Will also be cancelling the telephone line as UniFi provides a new line/number. Being one of its earliest subscribers, I get a choice of a number I want.

As for the tv, I think I'll just stick with Astro for now. But for those without Astro, the UniFi HyppTV could provide an enhanced tv-watching experience. I believe in time to come, UniFi's HyppTV could give Astro a run for their money. Its reception is not hampered by bad weather the system being on fibre optics, unlike Astro's satellite tv. Besides, with a combo of tv and Internet (and phone), subscribers pay less through UniFi versus having to pay separately for ISP and Astro's tv access. And the phone, of course.

So, if you've not been getting good Streamyx service, or thinking about subscribing to Astro, there's now an alternative. You may want to take a look at what UniFi has to offer.
Posted by HappySurfer at 9:28 AM