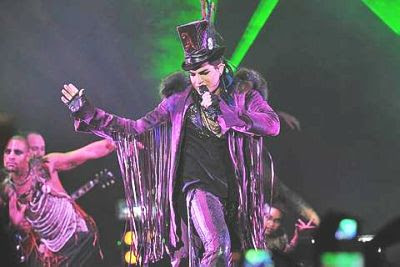 Adam Lambert was in town last Thursday as part of his Glam Nation tour which started in June. Over 10,000
concert tickets were quickly snapped up filling the Putra Indoor Stadium in Bukit Jalil with screaming, excited fans.


In honor of his pledge to obey local rules, he did not kiss anyone. The glam-rocker created a stir by kissing his bassist Tommy Joe Ratliff at his recent Tokyo concert.

The 28-year-old American Idol 2009 runner-up who is openly gay, kept his word of providing “lots of glitter and leather” in his feather and gothic-themed ensembles at the highly-charged show. In the 90-minute concert, Lambert thrilled his fans with hits such as For Your Entertainment, Whataya Want From Me and If I Had You.


Source: The Star
Posted by HappySurfer at 1:03 PM