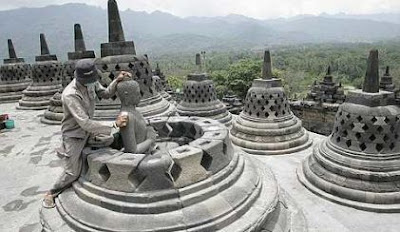 I'm saving this picture from The Star today for my girlfriend who is planning to visit Borobudur November end. She won't see this though until a week later as she's right now on an adventurous Turkey holiday.

That's going to be a lot of cleaning to do because the monument comprises six square platforms topped by three circular platforms, and is decorated with 2,672 relief panels and 504 Buddha statues. A main dome, located at the center of the top platform, is surrounded by 72 Buddha statues seated inside perforated stupa according to Wikipedia.

I received a hit yesterday that enquired as to the distance between Bandung and Mount Merapi. I looked it up and from the map, Bandung is almost midway between Jakarta and the volcano and that distance is 310 miles or 500km. This would put Bandung roughly about 150 miles away from Mount Merapi, and the restless volcano is still spewing hot ash as of today after it erupted on Monday. 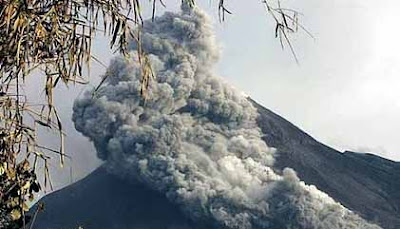 Image source: The Star
Posted by HappySurfer at 3:32 PM