Why are Cigars handed out after a child is born 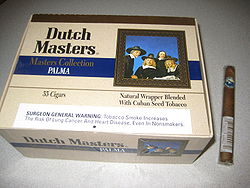 Did you know that the tradition of giving away cigars to celebrate the birth of a child has its roots in the latter part of the 17th Century? In those days, cigars were quite rare thus to be treasured and guarded as one would with money. Handing out cigars, therefore, was an expression of deep appreciation.

So, the next time someone hands out some Dutch Master cigars, you know why. Incidentally, a colleague did that just last week after the birth of his firstborn, a boy.
Posted by HappySurfer at 1:06 PM