The Star reported that a major earthquake struck Mexico on Tuesday, unleashing panic as it damaged hundreds of buildings and caused homes in the capital to bounce like "trampolines". 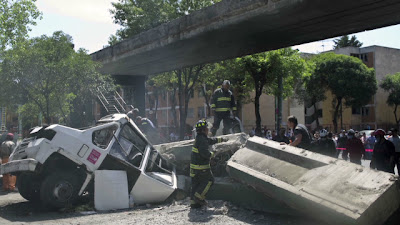 Bridge falls on minibus in Mexico quake
Source: By the CNN Wire Staff
The 7.4-magnitude quake that shook Mexico City for more than a minute sent office workers fleeing into the streets. Cell phone lines went down, building were evacuated, traffic snarled and the stock exchange had to suspend trading early.

The good news is no deaths were reported and the quake caused no major disruptions to air travel or to oil installations, but it scared many residents.

A map from CNN showing the location of the earthquake.. 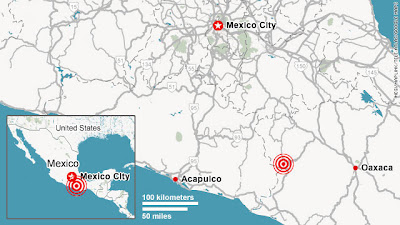 The White House says President Barack Obama's oldest daughter, Malia, is safe and never was in danger during a strong earthquake Tuesday in Mexico.

Malia, 13, accompanied by Secret Service agents, has been in Oaxaca in southwestern Mexico for a school-sponsored service project. The U.S. Geological Survey said the earthquake was felt strongly in Oaxaca.

The quake was followed by an aftershock that shook southern Mexico, swayed buildings in Mexico City and sent frightened workers and residents into the streets. (The Associated Press)

A video indicating how far the earthquake was felt..