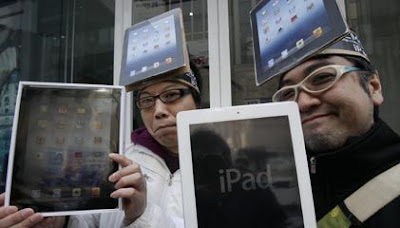 A friend across the Causeway in Singapore was mulling over whether to join the line and be one of the first people in Singapore to own Apple's new iPad.

Singapore is among the 10 countries that the new iPad goes on sale today, Friday. Other countries include the United States (but of course), Canada, France and Britain, with diehards lining up overnight in front of Apple stores in Munich, Paris, London, Singapore and Hong Kong.

The new iPad though not marketed as a revolutionary product like earlier versions are still being snapped up by Apple fans, or devotees rather. The iPad competes with Samsung Electronic's Galaxy and Motorola's Xyboard, among others.

Apple's new iPad, this third generation 4G-ready tablet computer is slightly heavier than its predecessors and comes with a more powerful CPU and screen and better camera.

A teardown of the new device shows key parts from Qualcomm, Broadcom, and Samsung Electronics as in previous versions.

Apple's new iPad proved to be another hot-seller, with hundreds queuing at stores across Asia to be the first to get their hands on the tablet computer as the company's share price hit $600.01 for the first time, easing back to $585.56 at Thursday's close. If you own a share of Apple stock, you could easily buy the new iPad and with change back. The stock is far more expensive than the $499 starting price for a Wi-Fi iPad.