March 11 2011 will forever be remembered as the day a devastating earthquake and tsunami changed the lives of thousands in Japan. 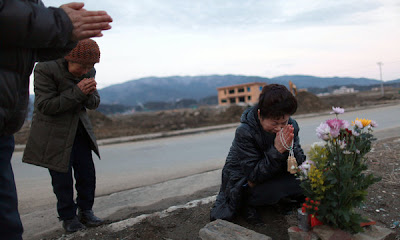 NIHONMATSU, Japan — Nobody knows whether Hiroshi Yokoyama’s elderly parents tried to outrun the tsunami waves that engulfed their home in Namie on the Fukushima coast a year ago.

But Mr. Yokoyama does know that he would have searched for them high and low, if not for a second disaster that unfolded at the nuclear power plant just a few miles away, forcing him to abandon his search.
More..Effects of Japan’s Disaster Are Still Unfolding 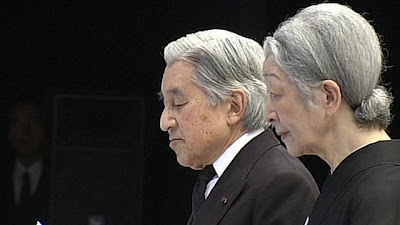 Emperor Akihito: "We shall never forget those who gave their lives in rescue missions"

Japan is marking the first anniversary of the devastating earthquake and tsunami which struck the north-eastern coast, leaving 20,000 dead or missing.

Thousands of people were evacuated as radiation leaked from the plant.

There were memorial services, and a minute's silence was observed at the moment the quake hit, 14:46 local time.
More..Japan marks quake and tsunami anniversary


Japan: A Year After the Tsunami, A Coastal Town Comes Together (TIME)


Driving into Minamisanriku, it’s hard not to feel a little discouraged. A cold drizzle falls over what used to be a thriving, picturesque fishing village but is now a barren swatch of gray cement foundations. The twisted hulks of smashed cars are piled up at the edge of town, still waiting to be hauled out. A helix of painted metal from some long-gone building floats in a waterway that runs through town.
More..Japan: A Year After the Tsunami, A Coastal Town Comes Together 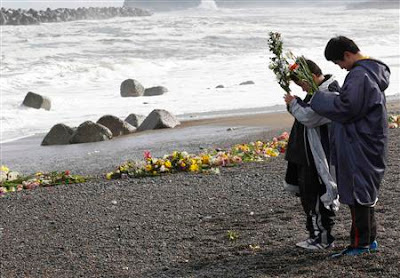 Taketo Endo (R), 12, and his brother Haruto, 10, offer prayers for their parents, who were killed in the March 11, 2011 earthquake and tsunami, at a seaside which was damaged by the disaster in Iwaki, Fukushima prefecture, March 11, 2012, to mark the first anniversary of the earthquake and tsunami that killed thousands and set off a nuclear crisis. REUTERS/Kim Kyung-Hoon

With a moment of silence, prayers and anti-nuclear rallies, Japan marked on Sunday one year since an earthquake and tsunami killed thousands and set off a radiation crisis that shattered public trust in atomic power and the nation's leaders.

The magnitude 9.0 earthquake unleashed a wall of water that hit Japan's northeast coast, killing nearly 16,000 and leaving nearly 3,300 unaccounted for, and the country is still grappling with the human, economic and political costs.
More..Japan mourns tsunami dead; grapples with aftermath

Posted by HappySurfer at 9:22 PM