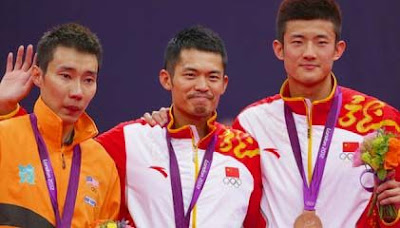 Datuk Lee Chong Wei (left) put up a gallant fight but lost 21-15, 10-21, 19-21 to Lin Dan in the men's singles badminton final of the London Olympics at the Wembley Arena on Sunday.

His gold medal hopes have been once again dashed by China’s Lin Dan, his nemesis in the men's badminton singles.

This is the second time Chong Wei has lost to Lin Dan in the clash for the Olympics gold medal. In the men’s singles final in the 2008 Beijing Games, Chong Wei lost 12-21, 8-21 to the Chinese ace.