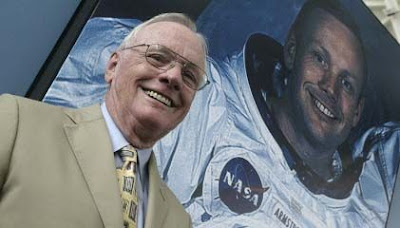 "That's one small step for (a) man, one giant leap for mankind." -- The man who said these famous words that have since been etched in history has died.

American astronaut, Neil Alden Armstrong, the first man to set foot on the Moon passed away on Saturday, August 25, 2012. He was 82.

Talk about landing on the moon, I remember my uncle teasing my late grandmother as she was setting up the altar table during one Mooncake/Lantern Festival. My uncle remarked that man has landed on the moon which made offering prayers to the Moon meaningless. Ignoring that and quite skeptical about man's landing on the Moon, my beloved grandma continued with the same prayer ritual right to the end. Such is the power of customs and traditions.

Customs and traditions bring us to a Chinese festival of the month. We are currently in the midst of the 7th lunar month. For the Taoist/Buddhist Chinese community, this is the time to make offerings to hungry and stray ghosts, thus named Hungry Ghost Festival. It is believed that during the 7th lunar month, the gates of Hades open to allow spirits to move about freely in the human realm.

For families who observe this Hungry Ghost Festival, two days are designated for prayers. The two days are the 14th and 15th days of the 7th month which is tomorrow and day after. The session begins at dusk. Different dialect groups pray on specific days every year - either the 14th or the 15th.

Offerings of joss-sticks and candles, money, gold and silver, and clothes (these are in paper form which will be set alight at the end so that the offerings can be received), real food and drinks will be laid out outside the house by the roadside. It is believed that once a family starts this custom, the practice has to be continued yearly because the spirits would come back every year to receive the gifts.

The Hungry Ghost Festival or commonly-referred to as Phor Thor (pronounced Por Tor), is celebrated on a grand scale here in Malaysia - so much so that the state of Penang up north is in the process of applying for this Hungry Ghost Festival to be gazetted as an intangible cultural heritage. 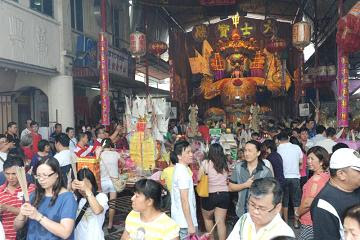 During this month, which started on Aug 17 lasting until Sep 15, one will see makeshift altars erected along roadsides for a grand feast for the spirits. The offerings are to thank the spirits for a bountiful year the previous year and to request blessings for another good year.

Stage or opera shows (called Ko Tai) are also part and parcel of the Phor Thor festival. Front row seats are usually left unoccupied, meant for the spirits. With Chinese opera being a dying artform here in Malaysia, most of the Ko Tai performances come in the form of just singing or puppet shows. Performers used to dress in sexy scanty outfits but the dress-code has been regulated in the last few years to make it children-friendly as these stage shows are open to the public.

If you are in Penang, you can experience a Penang Hungry Ghost Festival from a series of traditional Chinese performances and setups throughout the month for this celebration. Hokkien and Teochew Operas, as well as puppet shows will be shown at various places, such as Penang Road, New Lane, Mount Erskine Road, Fettes Park, Batu Lanchang Market, Thean Teik Road in Air Itam, Padang Brown on Datuk Keramat Road, Anson Road Market and more. 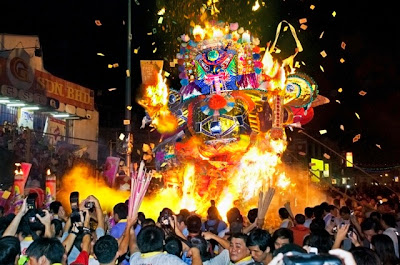 Posted by HappySurfer at 6:13 PM