We read everyday of records being broken at the London Olympics - of the best this and the best that. Malaysia too has her fair share of bests and firsts.

Yesterday, The Star carried an article that said Ken Nee is first Malaysian to reach diving final in the Olympics.

The article said..
YEOH Ken Nee continued to make Malaysian diving history yesterday – becoming the first Malaysian to qualify for the final of an individual event in the diving competition at the London Olympics.

On Monday, he became the first Malaysian diver to qualify for the semi-finals when he was placed ninth out of 29 divers in the men’s 3m springboard event. Only the top 18 made the semi-finals.

This means the hope of another Olympic medal after the silver medal win by Lee Chong Wei in badminton, is still alive.

Yet another glimmer of hope comes from Pandelela Rinong who has made it into the semis of the 10m platform. 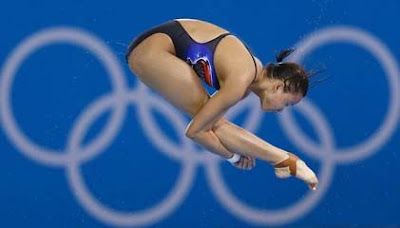 Pandelela, Malaysia’s flag bearer at the opening ceremony on July 27, qualified in second place in the qualifying session. She scored a total of 349.00. China’s Chen Ruolin was the top qualifier with a score of 392,35.

Germany’s Christin Steuer was the third best qualifier with a score of 341-75.

Another Malaysian diver everyone is watching is Bryan Nickson Lomas. We will see him in action on Aug 10 (tomorrow).


Update:
In the evening, The Star reported that Pandelela makes it to 10m platform final

The Sarawakian lass finished a creditable fifth in the field of 18 contestants in the semi-finals, with a score 352.50 points.

The top 12 qualified for the final, which will be held at 2am Friday (Malaysian time). We shall know the result in the morning papers.

Posted by HappySurfer at 3:48 PM