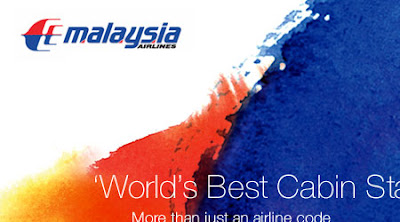 I find it hard to believe that a national carrier of a small nation could pull off such a feat. But, yay!

Malaysia Airlines (MAS) has done it again. For the sixth year this year, MAS has won the renowned Skytrax World’s Best Cabin Staff Award, bagging the award from 2001 to 2004 and again in 2007.

MAS was pitched against other airlines worldwide and the winning airline is determined through a global online survey.

The 2009 World Airline Awards is based on the annual World Airline Survey by airline auditor Skytrax; and is recognised across the globe as the leading independent monitor of passenger opinions.

While we are on airlines, let's learn something about flying. Have you ever mulled over whether to go for a window or aisle seat on a flight? Experts advise to pick the aisle seat to help avoid dangerous blood clots or DVT (Deep-vein thrombosis), and it makes no difference whether you are sitting in economy or business class according to a U.S. study.

The study found that 75 percent of cases of deep-vein thrombosis were due to people not moving enough and most sufferers were in non-aisle seats where passengers tended to move less.

Wearing compression stockings has been proven to reduce the risk. Other common sense recommendations include drinking lots of water and cutting back on alcohol and caffeine.

As for catching an infection off someone on a plane, there is little concern unless you are within two rows of that person.

And for jet lag, try a dose of melatonin at the bedtime of the desired destination.

Source: The Star..Window or aisle seat? Go aisle on planes, says study
Posted by HappySurfer at 10:23 AM