Vote for Sipadan in the Second Phase of the New7Wonders

Have you cast your vote yet for Sipadan Island to be included as one of the new Seven Wonders of the World? The last time when I first talked about voting for Sipadan, the New7Wonders site was quite difficult to access, but not this time. Give it a shot. Vote for Sipadan in the Asia continent. 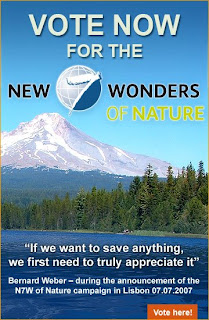 A little update since the last time, Sipadan has qualified to be among the 261 national and multinational nominees emerging from 222 participating countries in the nomination stage. The next stage requires Sipadan to make it to the top 77 by group category in the second stage that started in January ending on July 7 this year. So every vote counts.

On the site's Live Ranking, Sipadan is currently in 17th position in the ISLAND category.
Posted by HappySurfer at 2:52 PM